From Sim Innovations Wiki
Jump to navigation Jump to search

Light Emitting Diodes can be used for various applications, annunciator panels, instrument lighting, gear indicator lights, and more. With the hw_led_set API function you can control the brightness of an LED, from off (0) all the way to on (1).

When an LED is conducting, it has close to zero resistance. This means that when the LED is conducting, it creates a shortcircuit. Therefore you will always need to use a resistor in series with the LED, or you'll destroy it. And that is where it gets a little bit tricky... LED's also have something called 'forward voltage'. This can be seen as the voltage that is 'lost' on the LED. A usual forward voltage is 1.7 volts, but this varies between LED's and I advice you to look it up in the specifications document of your LED. But lets say that your LED has a forward voltage of 1.7 volts, a typical (forward) current of 20 milliamps (mA), and we drive it with 5 volt from an Arduino or Raspberry Pi. To find out what resistor to use, you first subtract the 1.7 volts from the 5 volts:

Now we can use the formula R = U / I (resistance is voltage divided by current), and this makes:

We would have to use a resistor of 165Ω (Ohm). But since a 165Ω resistor does not exist, we round it up to the closest resistor value available, which is 180Ω when following the E24 series (E-series).

Now the next explanation is optional, but it is certainly interesting for you to know. You can also place LED's in series, this can save you a lot of components when you have to drive multiple LED's together. With 5 volts you cannot do much, but with for example 12 volt, you can have up to 7 LED's in series (1.7 volt forward voltage). Let's use the 5 volt from the previous example. If we divide 5 by 1.7 we get 2.9. This means we can place two LED's in series (always round to the lowest number). With two LED's this creates a forward voltage of 3.4 volt (1.7 x 2), and if we do the same calculation:

Now we will have to use a resistor of 80Ω. This one also does not exist, so we use 82Ω.

This schematic overview shows both the single LED and the LED in series example. 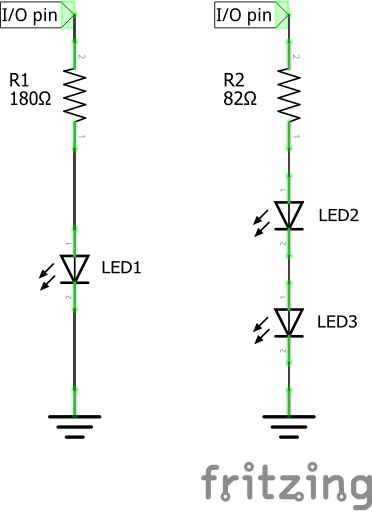 Now that we have that out of the way, we can start with some examples. We're going to look at two examples: LED's linked to the panel brightness, and an annunciator panel.

We will create a simple annunciator panel that shows a warning light when the oil pressure is too low and when the bus voltage gets too low. We want these LED's only to turn on when there's actually bus power, so we take the bus voltage into account as well.

You can easily extend this script to your liking. Low fuel, vacuum, etc... Just add more datarefs or variables, and add more LED's.