The Sim Innovations Garmin G5 is an interpretation of the real G5 unit build by Garmin. It is in no way a training aid for the real Garmin G5 flight instrument! 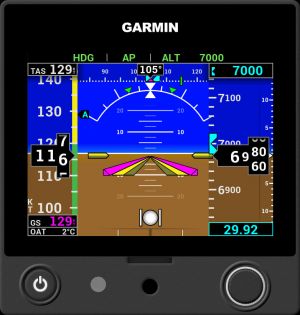 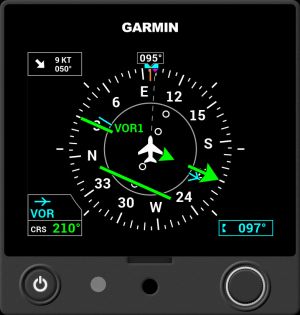 The Garmin G5 panel consist of two instruments, the G5 screen (either PFD or HSI) and the bezel. Together they form the G5 in it's original aspect ratio (4:3). You can scale the panel as a whole to make it fit in your instrument panel, the default panel size is 782x822 px. The instruments in the panel were made in twice the size, assuring the image quality stays to an optimum. You can also use just the G5 screen, without the bezel, and control it with hardware inputs. You can either use one G5 as PFD or HSI, or have both a PFD and HSI in your panel.

Regular primary flight display with autopilot information on top. On the left you'll find airspeed, which can be configured as Knots, Miles per hour or Kilometers per hour. On the right you'll find altitude in feet and vertical speed in feet per minute. On top you will see the heading indicator, with a magenta triangle indicating ground track, and a either green or magenta indicator (VLOC or GPS) for the navigation source. Each of these indications have their own autopilot bug corresponding with the autopilot setting. The roll indicator has two green triangles indicating a rate one turn based on true airspeed. On the bottom you will also see the classical turn rate indicator, together with a slip indicator ball.

The HSI display shows a CDI, with a GSI on the right side when vertical guidance is available. Switching between sources is done in the aircraft itself. On the top left you will see the wind vector when the OAT probe is enabled. On the top right distance is shown in Nautical miles when the selected source is GPS. The CDI can be overlay-ed with a single and double bearing pointer. The source for these bearing pointers can be selected from the menu. 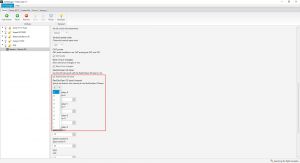 Follow this link if you want to go back to the RealSimGear firmware.