Support for Air Player desktop on ARM devices, like the Raspberry Pi.

Can you clear up some confusion for me regarding Air Player (ARM 32) on a Raspberry Pi Zero 2W.

I am struggling to get my head around the snippets of info that I can find. I note the requirements are 1GB ram and we have 512MB but you mentioned in a previous post that it did run on the older Zero but was fairly slow. The new Zero 2W is Quad core and MUCH faster execution) so should run ok, about 5 times faster in multi core and 40% faster in single core than original Zero.
Screen resolution in use for this application will HDMI 640x480 so fairly lightly loaded.

Air Player ARM supports GPIO on the 'Pi'. The Pi Zero 2W has exactly the same standard GPIO header format and convention as the larger footprint Pi B+ 2/3 etc so does that mean that I/O is, or should be supported with the Zero 2 W ?.

Would I also be correct in saying that to program for a Pi Interface then it would be just a matter of assigning hardware IO to 'Raspberry pi' / pin No. and then pushing it to player ? (Presuming it would work on the Pi Z2W)

Thanks,
Joe
“Everything in moderation, including moderation.”
“Experience is merely the name men gave to their mistakes.”
Joe (CISSP) -IT security consultant
Top

I suppose it will work, like the older version worked as well. Not that powerful, but it worked.
I guess that you will have to choose from these pins: https://siminnovations.com/wiki/index.p ... i_2,_3_&_4
Top

Thanks Ralph,
Yes, they were the ones I was looking at. Luckily I have the ONE Zero 2 W that is for my ADS-B RX but I can repurpose that to test. There are no boards at all to be purchased, like all Pi (Apart from Pico) they are made of 'unobtanium' and on back order for 9 to 12 months in the major outlets.
Having the basic I/O and HDMI is perfect for a piece of test equipment I am in the middle of building. (not sim related but using AM for the graphics and instruments)
Joe
“Everything in moderation, including moderation.”
“Experience is merely the name men gave to their mistakes.”
Joe (CISSP) -IT security consultant
Top

Joe, let me use your post to make a question. What about the GPIO20. Is not able to use?

Hope all is well ?
Good point! It is not listed on the wiki but I see no reason why it would not be available. There is nothing reserved about it at all. I think it is a mistake. It should ideally be reported as a potential bug/omission. I haven't actually got around to loading AP on it yet. I have been looking to buy another Z2W but there are NONE to be had anywhere I can find. I would rather not use the one I have as it runs an ADSB rx station.
Joe
“Everything in moderation, including moderation.”
“Experience is merely the name men gave to their mistakes.”
Joe (CISSP) -IT security consultant
Top

The GPIO list matches with the 2 and 3, but the 4 is different. The Zero might be equal to the 4, but I haven't checked.

So there should be a separate GPIO list for the 4.
Top

Hi Ralph, I can see no reason for GPIO 20 not to be available on the earlier ones ?. From the info I can find for the Z2W it is the B+ pinout. Even the Pi 4 pinout is still the same - as far as functionality and any 'reserved pins - and backwards compatibility.

I think the issue is that gpio 20 is not listed at all on the wiki - for ANY of the PI models - the 40 pin B+ 2,3 (IN AM ONLY) yet there seems no reason why it should not be.
If it is not available in AM, which it is not, then it can't be used in AM. Hope that makes sense ?
Joe
“Everything in moderation, including moderation.”
“Experience is merely the name men gave to their mistakes.”
Joe (CISSP) -IT security consultant
Top 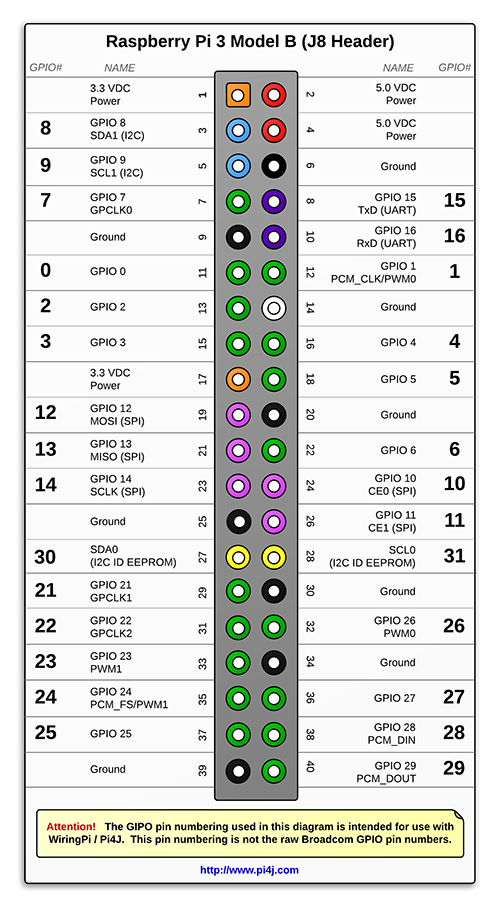 Hi Ralph, I used the schematics from here.
https://www.raspberrypi.com/documentati ... ry-pi.html

Is that diagram you are referring to not for some specific usage? There is actually a note on it that it doesnt correspondent to the broadcom numbering.
The Pi org schematics all use the broadcom gpio.. there are two conventions, BCM and Board. I thought BCM was used, as per the offiicial schematics, after the short model 1 header was scrapped of course...


The link you gave seems to be some odball java specific spin-off thing.

You are only doing this to confuse me in my old age...

Last edited by jph on Sat Jul 16, 2022 8:23 pm, edited 1 time in total.
“Everything in moderation, including moderation.”
“Experience is merely the name men gave to their mistakes.”
Joe (CISSP) -IT security consultant
Top

It was the first hit on Google, but indeed, in other images number 20 is there. I'm not sure why it isn't on the wiki, quite strange.
Top
Post Reply
16 posts